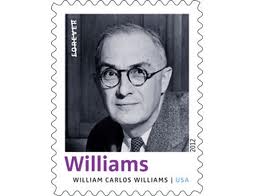 There’s a red wheelbarrow in front of the public library in Rutherford, NJ. It is the emblem of something wonderful that has happened in the hometown of William Carlos Williams, who wrote the simple and yet profound poem you can find on the back cover of this anthology.

There’s been a remarkable resurgence of poetry in recent years in Rutherford. A 2005 symposium on Dr. Williams, the most influential poet in American history, has led to a poetry cooperative, several websites, a monthly poetry reading series in the borough’s Williams Center for the Arts, and the Red Wheelbarrow Poets, who have emerged from the workshops held at the Public Library.

Now all this energy has coalesced, just in time for William’s 125th birthday celebration, in this anthology. The Rutherford Red Wheelbarrow Poets Anthology collects poetry from the Red Wheelbarrow Poets, featured readers at the Williams Center, student poets at the library workshops, and other poets either from the area or who have participated in any way in this ongoing renaissance. And it publishes for the first time a poem Williams wrote about one of the many babies he delivered in his other life as a country doctor!

While not every poet in this anthology writes in the style of Williams, it is fair to say that every single one of them is the beneficiary of the good doctor’s revolutionary approach to poetry. Many of the poems here are set in the places that Williams knew from his rounds, and many are set in poetic diction he would recognize.

What Williams did was to liberate American poetry from the confines of strict forms and unnatural diction, and free it from being the province of academics. After Williams, who showed how the natural language of common expression could be used in poetics, and averred there were no ideas except in things and that the local is the universal, literally anyone could be a poet. And now, with the proliferation of the Internet and poetry websites and blogs, millions of Americans are. And they are each and every one of the the spiritual sons and daughters of William Carlos Williams, delivered poetically (and in some cases physically!) by Rutherford’s most famous son.

This anthology has been produced by the Red Wheelbarrow Poets, and it showcases the workshop poets who have been meeting for more than a year at the borough library. But it also contains a generous selection of the work of the many other poets involved in the Rutherford revival. This includes those who have been featured or open readers at the Second Wednesday series at the Williams Center, the student poets who have also held workshops at the library, and other writers who have been attracted by the vortex created by all the great energy surrounding each of the poetry projects. Many of them have published poems on the Red Wheelbarrow Poets’ website, https://redwheelbarrowpoets.wordpress.com.

The workshops, held on all Wednesdays of the months, except the second, are lively sessions where the Red Wheelbarrow Poets read and comment on each other’s work, share articles on poetics, enthuse about their favorite poets, and inspire and encourage each other on.

They are led by Jim Klein, the founder of the Red Wheelbarrow Poets and a nationally-known poet and former editor of Lunch, a freeform attack on poetic complacency he launched 25 years ago at Rutherford’s Fairleigh Dickinson University. The influence of this anarchistic literary magazine traveled far from Rutherford, and a copy of Lunch could be seen prominently displayed in the front window of San Francisco’s famous City Lights Bookstore in the 1990s. While the Rutherford Red Wheelbarrow Poets Anthology may lack some the youthful exuberance of its predecessor, it seeks to make the same qualitative push against the universe, and it brings the poetic impulse full circle to the broader wisdom of maturity.

Workshop poets benefit from Jim’s quick grasp of poems he’s seeing for the first time and cogent suggestions for improvement, as well as memorable pronouncements on poetics like “A poem should be a subcompact car, not a Cadillac!” Jim is quick to spot the “live language” that drives great poetry, and teaches great care to be taken on the proper places for line breaks and new stanzas. (He also carries a ready supply of commas at all times for emergencies!)

The poets in the workshop show a wide range of ages and styles. One of the great things about the gathering is that many of them are poets who have been at their craft for decades, following Williams’ example. So many youthful poets and MFA candidates burn out young and give up on poetry, but many of the Red Wheelbarrow Poets are “lifers” with much to share with a younger generation.

The energy produced in the workshops is mirrored in the monthly readings held by the WCW Poetry Cooperative, led by poet John J. Trause and Jane Fisher, director of the Rutherford library. Each one is started off by readings and reflections on Williams’ work, followed by a featured reading and an enthusiastic open mike. The vibe is warm and supportive for all the poets’ work.

This anthology is being published to coincide with the September 2008 William Carlos Williams Symposium being held in Rutherford to mark the poet’s 125th birthday. The symposium, chaired by Della Rowland, has played a key role in launching the Rutherford revival, and this conclave with celebrate and extend the vortex that has been created. Many of its events will be held in the library or the Williams Center, which are just yards away from one of America’s literary landmarks, the Williams home at 9 Ridge Road.

There is a red wheelbarrow standing in front of the Rutherford Public Library. It wouldn’t be original to say that so much depends on it. But so much has proceeded from it. Stop by, and it you like any of the poems in this anthology, drop a coin on it. Or take one out.