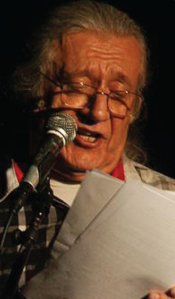 Williams Center for the Arts
One Williams Plaza, Rutherford NJ

Valery Oisteanu is a writer and artist with international flavor. Born in USSR (1943) and educated in Romania, he adopted Dada and Surrealism as a philosophy of art and life. He has been writing in English for the past 42 years. He is the author of 11 books of poetry, a book of short fiction and a book of essays: The Avant-Gods. A new collection of poetry with collage illustrations, titled Perks in Purgatory, was published by Fly by Night Press, New York, in 2010. For the past 10 years, he wrote art critic essays for Brooklyn Rail (New York). Oisteanu is also a contributing writer for French, Spanish & Romanian art and literary magazines. He exhibits collages and assemblages on a regular basis at the galleries in New York and also creates collages as covers and illustrations for books and magazines. Oisteanu also performs theater plays and musical collaborations with jazz musicians from all over the world, in sessions known as Jazzoetry. Valery Oisteanu is the receiver of Acker Award NYC 2013 for contribution to the avant-garde in Poetry Performance.

Spill green beer onto the ground
From a glass with a clover on it
Talking to Astrid about your Irish mother
Happy St Patrick’s Day Barney!
I cannot believe you are gone
Gone but not forgotten
The phosphorescence of your voice
On the corner of Grove Street
The shadows of Miller and Becket
They come to me in a dream
Barney in his couch, in his chair at Veselka
Lost in the maze of books at the Strand
Books that created resistance in Bucharest
Ionesco in the Evergreen review, devoured by the underground
Translating Gregory Corso into Romanian
I cannot believe Barney is gone