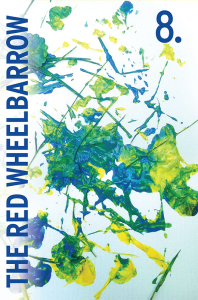 Williams Center for the Arts
One Williams Plaza, Rutherford NJ

The Red Wheelbarrow Poets will launch the gorgeous 8th edition of their yearly publication, The Rutherford Red Wheelbarrow, at readings at GainVille Café Friday, Sept. 25 (with musical guest Corina Bartra), and at the Williams Center Wednesday, Oct. 7. Both events are in Rutherford and start at 7 PM.

The book, pronounced the best of the eight in the series by editor Jim Klein, features a stunning cover by Don Zirilli and the poetry and prose of 40 area writers who have either participated in the RWP’s long-running weekly poetry workshop or who have read their work at the Williams Center or GainVille Café in the past year.

Interior drawings have been supplied by poet and artist Melanie Klein. Claudia Serea provided the cover design. John Barrale and Mark Fogarty are managing editors of the book.

The overall theme of the book again is Dr. Williams’ observation that the epic is the local fully realized. Many of the writers in the volume adhere to Williams’ groundbreaking poetic philosophy of writing about the everyday in vibrant, “live” language.

This year’s featured poet is also Don Zirilli. He is a New Jersey poet and publisher who is the owner of not one but two wheelbarrows. Don has also contributed four short essays on the work of Dr. Williams to the book.

The revival of poetry in Rutherford, Dr. Williams’ home town, began when poet John J. Trause, along with Jane Fisher, director of the Rutherford Public Library, founded the Williams Carlos Williams Poetry Cooperative of Southern Bergen County. From 2006 through 2012, Trause ran the monthly readings at the Williams Center, featuring poets from the tri-state area as well as from further afield. This First Wednesday series now is run by the “Gang of Five” (Claudia Serea, John Barrale, Don Zirilli, Zorida Mohammed and Anton Yakovlev). Mark Fogarty curates the monthly reading series at GainVille, which started in 2009.

The RWP weekly poetry workshop at Rutherford Borough Hall, now in its ninth year, is run by Jim Klein, the leader of the Red Wheelbarrow Poets. It is free and open to all local poets.

Both the Williams Center and the GainVille readings offer an open mic to poets who are also invited to submit their work for next year’s publication. Copies of the book will be on sale at both events and are also available online at http://www.lulu.com/shop/red-wheelbarrow-poets/the-red-wheelbarrow-8/paperback/product-22346521.html.